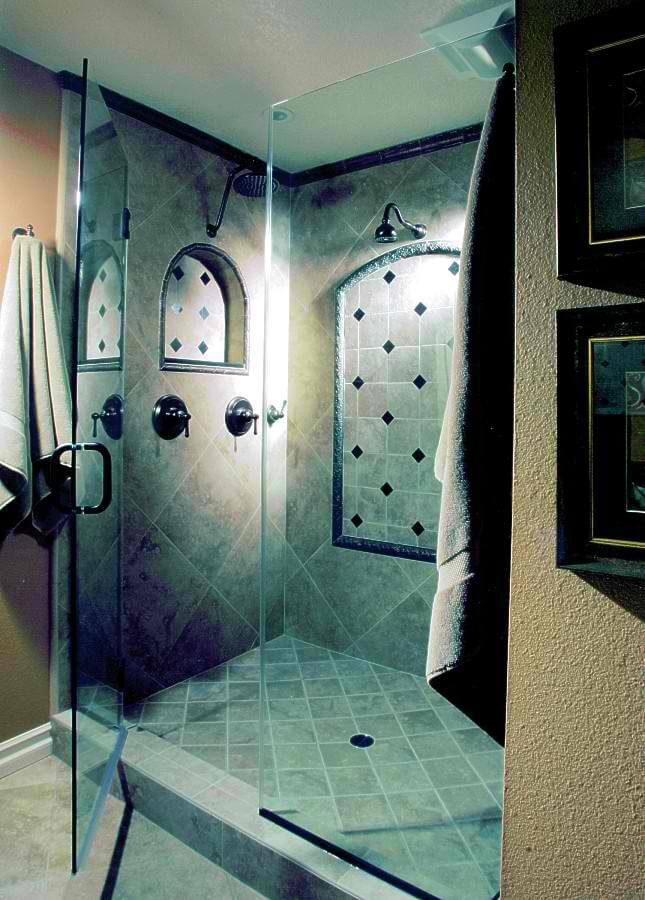 Jim and Melanie Burian wanted a luxurious master bath, but they knew getting the luxury look wasn’t the main challenge. “The biggest challenge was trying to provide more room in a narrow bathroom that was already small,” said Melanie. “We knew some of the changes we wanted made, but how to realize them in such a small space was more than we could handle ourselves.
On the second floor of their
2,100-square-foot home in eastern Mission Viejo, the master bath was and still is corridor-style. It had a small shower, a toilet area that was not separated, and an entrance door that blocked movement when it was open.
“What we wanted was to have a much larger shower, a separate toilet room, better countertops and special sinks,” Melanie said.

To realize their dreams they worked with a builder to:
Convert a closet in an adjacent bedroom into a large, tiled shower with multiple showerheads and a separate closet and toilet room.
Install a new granite countertop.
Add two new sinks with glass basins in a gold color.

Working with such a small space the original floor area is about 10 feet by 3 feet proved daunting.

“It’s part of the reason we hired Sea Pointe (Construction, Kitchen & Bath Specialists)” Melanie said. This Irvine construction firm specializes in bathroom and kitchen remodels. “We wanted a firm that specialized in bathrooms and would have a site superintendent on the project all the time so we wouldn’t constantly have to deal with subcontractors.”

The couple chose Sea Pointe because they had a good experience with the company when they remodeled their kitchen three years ago. “At that time,” Melanie recalled, “we wanted to have a home that was a bit larger and that suited our tastes.”

It wasn’t just the master bathroom that didn’t suit the Burians’ tastes or needs, it was the entire house. Built in the 1980s, it didn’t have the “open” feeling that is designed into today’s homes. The dining area was closed off from the living room by a wall, the flooring was uninspired carpeting, and the master bathroom was tiny, with a small shower and a toilet area that didn’t provide privacy. Everything just had a 1970s look, Melanie said.

“The homes for sale that we looked at were all very nice,” Melanie said, “but we would have had to change them to suit our tastes as well. We’d end up spending the same kind of money to change a new house and pay for the new house as well. It didn’t make sense.”

So, Jim and Melanie decided to begin remodeling. First up was the kitchen. A relatively small one, its cabinetry and counters were old and outdated, showing the wear and tear of many years.

What Jim and Melanie got in their remodeled kitchen was a granite countertop to replace the old tile, a mixture of new and re-faced cabinets, new appliances, new lighting and new maple floors. Jump ahead now to the beginning of this year when construction began in the master bath. The first things to be done were the structural changes, according to Len Jay, the production manager on the job.

To reconfigure the space, Sea Pointe used part of the adjacent bedroom closet for the expanded shower, adding a wall to make the toilet area separate. They also reconstructed ceiling areas for new lighting. It is, perhaps, the two sinks that draw the most attention. Within a new black-granite countertop, they have glass basins by Oceana with a gold finish. The bathroom is now much more formal and much more luxurious, and it exudes a sense of high style.

“We were really striving for a richer palette and a feeling of elegance in the remodel,” Melanie said, a large smile on her face. “To get exactly what you want and not have to worry, it makes it all worthwhile.” (Read the article here.)