Yorba Linda has a diverse home design setting; with the city formally established near 1910, you can imagine that home design style varied widely as different communities were developed over the decades. The older the Yorba Linda home and kitchen for that matter, the sooner Sea Pointe has been called for it’s award-winning kitchen design and build services. Your designer will collect your functional needs by interviewing you to learn how you use your kitchen and who in your family uses the kitchen most. Are you entertainers, are you home chefs, or is your kitchen just for show? Your designer will then learn your aesthetic style so they may design you a kitchen you’ll love and proud to have in your Yorba Linda kitchen. 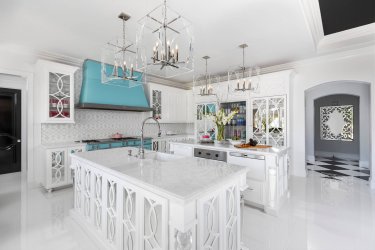 Glam kitchen with stunning design and fully-loaded amenities This luxurious kitchen takes advantage of 'custom' at a new level. Functionality is hidden everywhere in this kitchen with custom cabinetry featuring a high gloss lacquer finish with mirror insets. Both the refrigerator, freezer, 2 dishwashers, and both islands have utility wrapped in beauty.  There is a 3rd oven hidden inside the island on the right side. The islands also feature end cap spice racks also hidden buy this gorgeous cabinetry. The countertops are made from an exquisite light colored marble with a protective clear coasting.  Nestled between the refrigerator and freezer ...
See the full project > 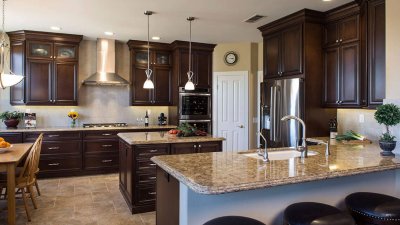 Whether you are remodeling your master suite, guest bath, or powder bath, we have custom design solutions for every need. One of our specialties is space planning and we love showing clients how we can make your small bath look much bigger by using a few design tricks. And sometimes we may just suggest using a portion of the closet that it backs up to and really giving you more space which may in fact increase your Yorba Linda home value. Take a look at our bathroom design and remodeling portfolio so you can get inspired for your bathroom remodel. 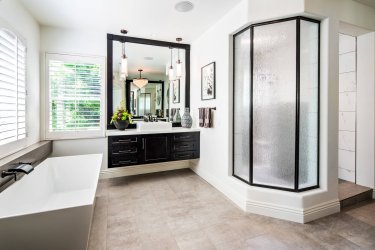 With impeccable taste and a vision for the space, our client jumped into designing a dream home. The focus of this remodel was transforming the master suite sitting room and large bathroom. Through the use unique yet subtle design materials, an essence of luxury and style have been brought into the sitting room. The sleek flooring paired with dark toned cabinets, mantle and hearth is balanced by the traditional archway and crown moulding to create transitional design style. Continuing the hearth material into the bathroom creates a seamless transition from space to space. Design features such as floating vanities, large ...
See the full project >
See Bathroom Design Portfolio

Yorba Linda has been ranked the 21st best city to live in by CNN in 2005 with just over 58,000 residents. The US Census Bureau also names Yorba Linda one of the richest US cities in the nation with the highest 6 figure median income, coming in at $121,075 in 2006. Yorba Linda covers 20 square miles as of today; in earlier years it covered parts of Fullerton but that was sold to Fullerton in the early 1900s.

Yorba Linda is a beautiful community with several planned communities and several that are more rural and support agriculture affairs as well.